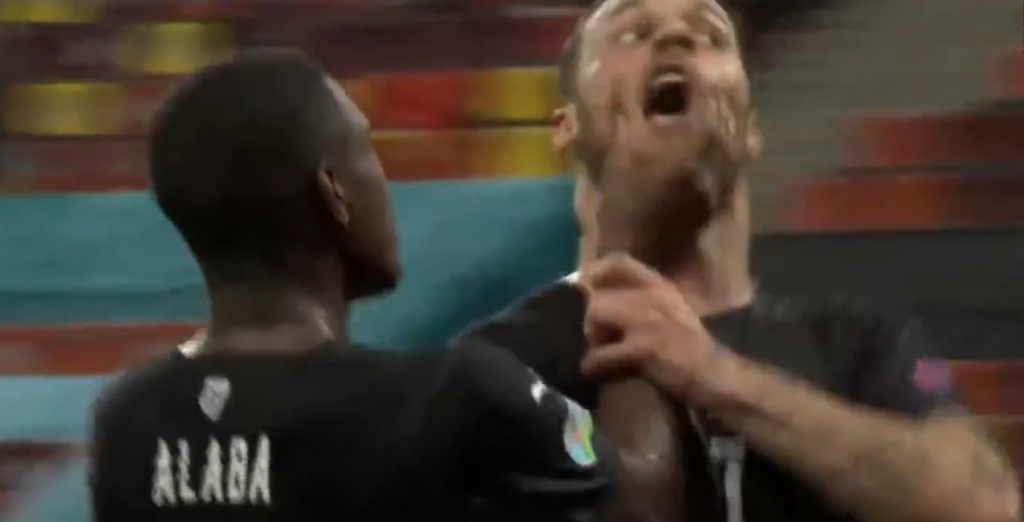 Tensions between Serbia and Albania surfaced in a game – and a tournament – which involved neither of them.

Monday marked North Macedonia’s debut at a major international competition. For their Austrian opponents, it was a chance to earn their first win at a European Championship, having failed as hosts in 2008 and guests in 2016.

Goran Pandev, two decades after his first international cap, scored the country’s first goal on the big stage to draw level in the first half. Augsburg’s Gregoritsch put Austria back in the lead, before ex-Stoke City and West Ham United forward Marko Arnautović scored his side’s third to put the fixture to rest.

It was his choice of celebration that landed Arnautović, who now plies his trade in the Chinese Super League, in hot water. After scoring, the Austrian forward – who’s father came from Serbia – started shouting at North Macedonia’s Egzon Bejtulai while making a rude-looking gesture. Austrian captain and FC Bayern veteran David Alaba quickly noticed that something was amiss with Arnautović’s choice of words and gestures and rushed to stop him.

According to Serbian tabloid Informer, Arnautović started cursing Bejtulai’s mother, using a racist slur used by Serbian and Macedonian nationalists against Albanians. Twitter users noted that his hand gesture was identical to what the Anti-Defamation League calls “a sincere expression of white supremacy.”

Bejtulai himself is part of North Macedonia’s Albanian minority and plays for KF Shkëndija, a club once dissolved by Yugoslav officials who feared that it would promote Albanian nationalism within the then socialist federation. Their fans have been involved in dozens of ethnically charged incidents, including the 2013 Macedonian Cup final in which they booed the country’s anthem and forced the fixture to be abandoned. The season before that, they spent an UEFA Champions League qualifier against Partizan Belgrade chanting Albanian nationalist slogans. Disgusted with what they believe is institutional bias in favour of Serb hooligans, they nicknamed UEFA’s ex-President “Platinovic.”

Of course, this isn’t the first time tensions between Serbs and Albanians affect a football match. After all, this very blog was conceived after that flag-waving incident in Belgrade. It is also not the first time it affects matches involving countries and clubs far from the Balkans. Xherdan Shaqiri’s celebration after scoring for Switzerland against Serbia at the 2018 FIFA World Cup, while wearing boots which featured a Kosovar flag alongside the Swiss cross, forced Jürgen Klopp to leave him in Merseyside when Liverpool visited Red Star Belgrade a few months later.

Within North Macedonia, hooligans often chant ethnic slurs at each other — or even by themselves, when away fans are barred for fear of violence. I once witnessed Vardar fans chanting “kill Albanians” on their way to their home Toše Proeski Arena for a poorly attended league fixture.

Skopje’s other large club, Shkupi, is named after the Albanian name for the city. Hooligans from Vardar and Shkupi were involved in violent clashes over controversial plans to build a church in an Ottoman-era fortress in 2011. In 2012, the league was suspended amid ethnic tensions which saw schoolboys and police attacked. In 2018, a Vardar fan was beaten to death by Shkupi supporters. Recently, Vardar supporters were leading protests against the country’s name change, allegedly with funding from the owner of Greece’s PAOK Salonika.

There is little to stop the hooligans from going at it: in 2012 a hooligan told BIRN that “the doors of local government, companies, and political parties are always open to us.”

North Macedonia’s first journey through a major tournament though has provided a rallying point for Macedonians, Albanians and Turks to come together behind the country’s red and yellow colours. Despite Monday’s defeat, this experience could be a stepping stone towards a better future for the country’s football — both on and off the pitch.

Arnautović, who’s surname ironically derives from an Ottoman term which means Albanian, has since claimed he is “not a racist” on Instagram and apologised for his “heated words.” UEFA faces calls to punish him regardless. Meanwhile, it’s official match report still features his celebrations, with a very clear view of the controversial gesture and his rather unpleasant face.