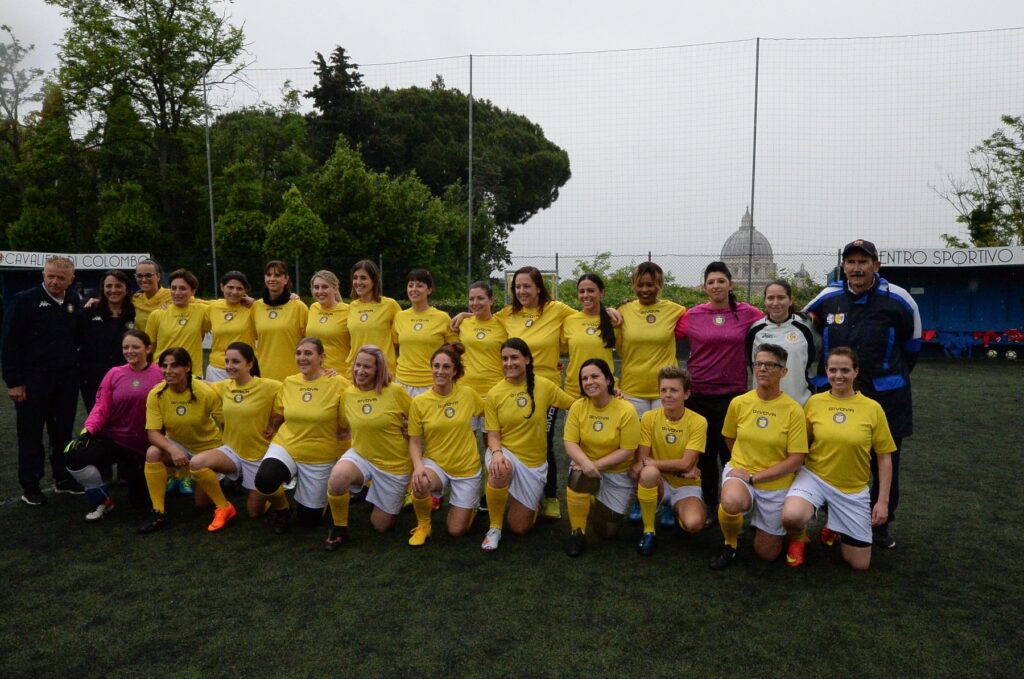 The beautiful game is even played behind the walls of Vatican City. Sort of.

Giovanni Trapattoni’s fabled managerial career spanned four decades. In between the likes of Juventus, where he won the European Cup in 1985, and Bayern Munich, there is a curious mention on il Trap‘s CV. While coaching the Republic of Ireland’s national side, it appears that Trapattoni took time off to manage another nation.

The Vatican City State is the smallest country in the world in terms of both area and population. It should be a struggle to put together a five-a-side match, let alone a full XI, from the around 246 citizens that live within the micro nation. Also, where would the stadium fit?

Vatican City boasts both men’s and women’s national teams, an eight-club league and several cup competitions. An impressive feat for a country unaffiliated to FIFA or UEFA, considering that there are full members without a league (Liechtenstein) or a women’s side (San Marino).

The Vatican City women’s side was formed in 2019. Officials called it an extension of the “considerable impulse” given by Pope Francis “to women within the Vatican”. Those playing for the team were either working for the Vatican themselves, or were the wives and daughters of employees. The team’s first captain was Eugene Tcheugoue, a striker on the pitch and an official in the Dicastery for Laity, Family and Life off it.

The team’s first match was against AS Roma’s women’s side, which won the match 10 to nothing. In their next match against ASD Trastevere, the Vatican’s women converted a penalty to score their first goal. Soon after, they were packing their bags for Austria to play third-tier FC Mariahilf of Vienna.

That fixture would illustrate how the team of God was, in Augustine of Hippo’s words, “a captive and a stranger in the earthly city.” While the Vatican’s anthem was playing before kick-off, several Mariahilf players lifted their shirts to reveal pro-choice messages and fans unfurled banners against homophobia. The Nuncio, or Papal Ambassador, stormed out of the stadium and the match was abandoned.

The protests came a few weeks after the Pope compared having an abortion to ‘hiring a hitman.’ The host side promptly apologised to its guests, while the players protesting the Vatican’s stance on the rights of women and LGBTI people expressed their regret the match was called off. Catholic news sites expressed outrage that activists had targeted amateur players. A Vatican-affiliated news source wrote that the “Vatican players were expecting a simple game of sport and with their sports manager took a difficult decision, not to contest the game and continue the exploitation of an event for which they had prepared with joy.”

The Vatican itself though was probably not innocent of exploiting football for other aims. According to The Telegraph, the women’s national side “was announced with great fanfare in May [2019] to combat criticism that the church was not doing enough to include women in key positions amid major scandals over the sexual abuse of nuns by members of the clergy.” The Vatican continues to vehemently oppose a woman’s right to choose and the Dicastery where captain Tcheugoue works still lists a number of anti-choice organisations on its website.

The women’s side does not appear to have attempted any other international fixtures since that day in Vienna and was last reported playing in the internal tournament of the Bambino Gesù hospital of Rome.

The Vatican’s men’s side has led a quieter existence, bar its association with Giovanni Trapattoni. It’s main rival is fellow micro-state Monaco – which has also not affiliated itself with FIFA or UEFA. In five matches between Europe’s wealthiest minnows, Monaco won three and two ended in goalless draws. Vatican City’s first and, to date, biggest win was a 5-1 victory over Swiss amateurs SV Vollmond Zurich in 2005.

The side’s heaviest defeat came in a match against the Palestinian national team in the West Bank in 2011. Despite holding their hosts at 0-0 at half-time, the travelling XI of priests scored one goal to the home side’s nine in the second half. The Holy See is one of only four European governments outside the former Eastern Bloc to recognise an independent State of Palestine.

The Vatican’s teams play in the Campo Pio XI stadium, built on the orders of Pope Benedict XV and opened in 1926. As a football pitch would not fit within the Vatican’s walls, the stadium lies a few blocks away from the city-state itself. The stadium hosts the annual Vatican City Championship, a league dominated in recent years by the Bambino Gesù Hospital. Curiously, FC Guardia – the team representing the Vatican’s famous Swiss Guards – have never won the Championship. Vatican City also has a cup competition for its league’s teams, as well as a Super Cup. Campo Pio XI also hosts the Clericus Cup, contested between the Catholic Church’s Rome-based Seminaries.

The Pope himself is apparently a massive football fan and even expressed his disappointment at his native Argentina’s defeat in the 2014 FIFA World Cup final. The city-state has no plans to join FIFA, as officials feel that would ruin the sport’s amateur character in the Vatican City and “be like a business.” But as the Vatican is reportedly preparing to send a team to the Olympic Games, don’t discount seeing Musei Vaticani challenge for a spot in the UEFA Europa Conference League soon.

Back to Trapattoni’s time with the Vatican, there are dozens of references online to him taking over the national side, including on FIFA’s own website, twice. Reports at the time said Trapattoni would coach Vatican City on 23 October 2010 against Guardia di Finanza, Italy’s financial police corps. It appears that match ended 1-0 for the finanzieri, but with Trapattoni’s fellow A.C. Milan Hall of Fame member Walter Novellino in the dugout for the Pope’s men instead.