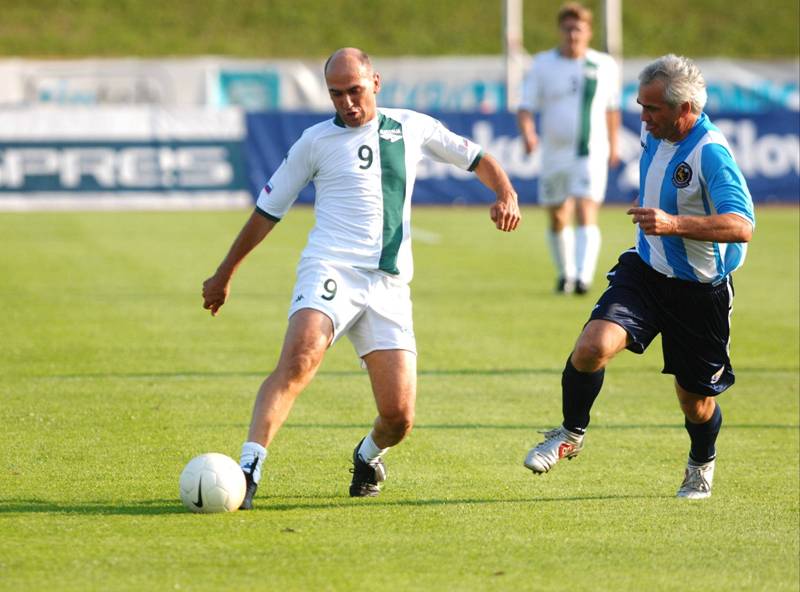 Soon the EU will be led by a man who took to Twitter to celebrate a team that refused to take the knee against racism.

In one of football’s most iconic moments this season, Alexandre Lacazette defied Slavia Prague’s standing players by staring at them he took the knee before Arsenal’s Europa League quarter-final.

Of course, this was not Slavia’s first brush with racism-related controversy in 2021. A few weeks before and several hundred miles north of the Emirates, one of their players had racially abused Glen Kamara of Rangers.

Lacazette scored twice as Arsenal dispatched their opponents with an emphatic 4-0 that night. In between the posts that celebrated the Gunners’ defiant stance, staring at Slavia’s starting XI in the middle of the pitch, stood one curious tweet from the man who will soon preside over most of the continent.

Janez Janša, Slovenia’s Prime Minister, added “Respect Slavia Prague” to his retweet of a photo showing Slavia’s line-up standing while everyone else – Lacazette, his teammates and the referee – took the knee. Janša was in questionable company that night. Other retweeting accounts included several conspiracy theorists, nationalists and the Czech branch of Spain’s far-right Vox.

Since returning to office last year, Janša is an integral part of the EU’s informal (so far) authoritarian caucus, alongside his close ally and fellow die-hard football fan Viktor Orbán. Janša was the only EU leader to congratulate Donald Trump on ‘winning’ the 2020 election, regurgitating the same conspiracy theories that led to the deadly invasion of the U.S. Capitol in January. Within Europe, he has compared liberal MEPs to Serbian dictator Milosevic while maintaining that “Slovenia owes absolutely nothing to Brussels.” At home, he is accused of threatening press freedom, silencing civil society and undermining democracy.

Janša’s brand of politics could soon have a real impact beyond the borders of his own nation. Under the EU’s rotating presidency system, Slovenia is next in line to lead the bloc’s most influential meetings in the second half of 2021.

Over a decade ago, Janša was once again presiding over the Union. During his tenure, he went to the European Parliament to pitch his vision of a football team of the European Union. Jokes such as ‘does each EU member state get one footballer?‘ aside, Janša was trying to make a point that there was little in terms of a European identity that people could connect to. In his mind, people would rally behind the blue-and-yellows when they took on “a Latin American team or the African Union.”

Potentially, he was thinking about how Slovenians rallied behind the Yugoslav team in his youth. Definitely, his words suggest a worry that the European Union had failed to forge an identity that people could buy into, an early warning of things to come with the UK referendum and the rise of Eurosceptic politicians from London to Rome to Warsaw. Little could suggest at the time that one of those leading the charge against EU institutions would be Janša himself.

In the coming few months, Janša won’t be the only Slovenian – or even the only person to come from the small town of Grosuplje – in a European leadership role. His compatriot Aleksander Čeferin has presided over UEFA since 2016, the first President to be elected after Michel Platini was barred from the beautiful game.

A year ago, Jansa was thanking Čeferin on Twitter for apparently talking a Chinese billionaire into donating masks to help Slovenia contain the then-novel coronavirus. After a couple of weeks and some mild criticism of the government’s pandemic response, Janša-allied media outlets blamed Čeferin for the spread of COVID-19. More recently, the two have traded insults in public: Čeferin alluding perhaps that the Prime Minister is a “sociopath and paranoid,” Janša suggesting that the President violated sports values with his “political appearances.”

Janša took to his favourite Twitter, I assume gleefully, to celebrate UEFA’s demise at the hands of the European Super League co-conspirators. “If an organisation is run with inflated arrogance in the style of ‘the answer is the same as before,’ then it sooner or later falls apart,” tweeted the PM. After Čeferin won that battle, the question is if he’ll come home for another one with his fellow Grosupljan.

Apart from tweeting about football, Janša also seems to like playing it. He wore Slovenia’s white and green in a 1:1 draw against Argentina at the ‘World Cup of Emigrants’ in 2007.

Unlike his ally Viktor Orbán, he does not appear to have played in an official fixture. However, he played for Mladina, a left-wing dissident magazine which counted Janša among its journalists in Yugoslav times. After Slovenia declared independence, Janša met his Mladina comrades on the pitch again as opponents. One of them recalls how “he brought in the goalkeeper from Dinamo Zagreb” to play for his Slovenian Democratic Party’s team. “He wanted to win.”

Seeing Slovenia’s decline in the World Press Freedom Index, a professional footballer from Croatia might not be the worst obstacle a Slovenian journalist faces when Janša is on the other side.