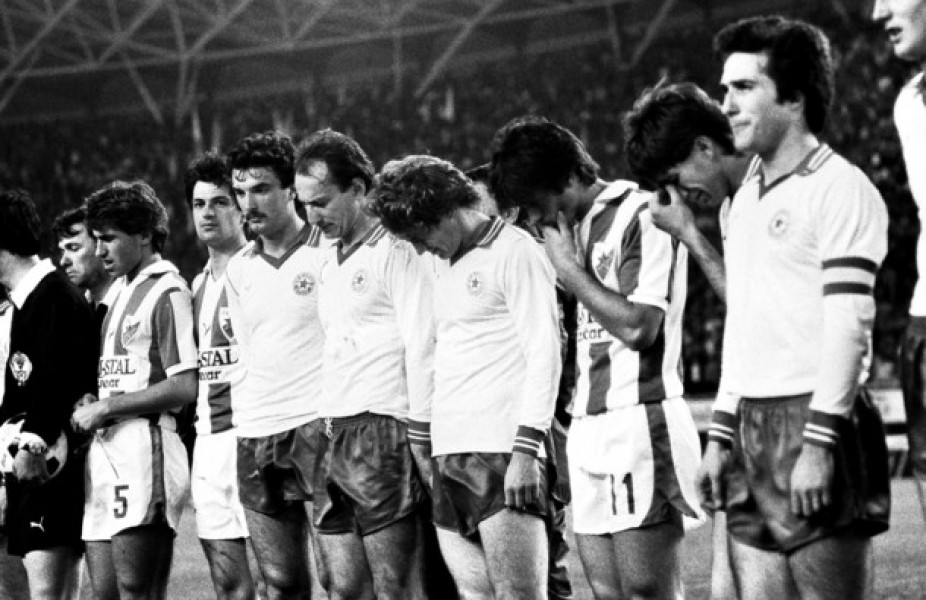 When Croats and Serbs cried together

It seems hard to believe that once the fans and players of Hajduk Split and Red Star Belgrade were crying together over a common hero.

Josip Broz Tito, who led partisan resistance against the Axis during World War II, was the leader of socialist Yugoslavia since its proclamation in 1945. He died of gangrene on 4 May 1980, after a year of worsening health and three days before his 88th birthday. The national TV interrupted its broadcast so that Miodrag Zdravkovic, himself seen in shock while preparing to get on air, could read out the statement: “Comrade Tito has died.”

As the news of Tito’s death spread around Yugoslavia, the 25th matchday of the Yugoslav First League was in full swing. Hajduk Split were hosting Red Star Belgrade at their Stadion Poljud, which was opened by Tito and was built for the 1979 Mediterranean Games.

At the 41st minute the referee was instructed to halt the match while Split’s mayor announced Tito’s death to those on the pitch and a crowd of 50,000. The scenes that followed went down in history, as players, referees and fans burst into tears. When the words ‘may he rest in peace’ were said, the crowd started singing Druže Tito, mi ti se kunemo— Comrade Tito, to you we give our oath.

Yugoslavia’s football, along with the country itself, lasted for another decade after this display of brotherhood and unity, true to the spirit of the socialist slogan. In May 1990 the Dynamo Zagreb v Red Star Belgrade fixture was abandoned after rival sets of fans and the police got involved in what the Guardian wrote were the “worst scenes of football hooliganism witnessed in Europe.” The Socialist Federal Republic of Yugoslavia was no more in 1992.

The fans of the two clubs involved in that match left their mark in the hostilities that followed the break-up of Yugoslavia. Red Star Belgrade did win the European Cup in 1991, in what was Yugoslav club football’s greatest and last achievement. Soon after, Red Star’s Delije firm would make up the core of the Serb Volunteer Guard, a paramilitary unit under the command of the firm’s leader Zeljko Raznatovic, better known by his nickname Arkan. The unit and its leader were accused of crimes against humanity, including active participation in ethnic cleansing in Bijeljina and Zvornik during the Bosnian War. Arkan was assassinated in 2000, before he could be put on trial to answer the 24 charges put against him.

Red Star’s hooligans have also been involved with violence during international fixtures. Ivan Bogdanov, one of the best known ones, was seen slicing the fence open to let Serbian fans onto the pitch during an abandoned Italy v Serbia qualifier in 2010. He spent 2.5 years in prison in Italy and Serbia and went to the first match after his release, a derby against Partizan. In 2014, Bogdanov was one of the home supporters who invaded the pitch during the infamous Serbia v Albania qualifier in Belgrade that was also abandoned after mass fights broke out due to a drone carrying an Albanian irredentist banner.

In 1990, Hajduk removed the red star from their club crest and returned to their traditional logo which is based on the checkerboard that dominates Croatia’s coat of arms. A plaque that stands outside Hajduk’s stadium commemorates 27 members of the main fan firm, Torcida, that died in Croatia’s war of independence.

In 2007 Torcida members were seen wearing t-shirts with Nazi insignia. A firm leader told local press that they had “always been leaning to the right” denying though any Nazi affiliation, adding that he wore the shirt because he liked the symbols. To this day, Croatian football — including international fixtures — feature far-right banners and slogans.

Hajduk fans were accused of crowd disturbances, a pitch invasion and throwing objects during their Europa League fixture against Everton this month. Their team had made the news in 1984 when a fan took to the centre of the pitch before a match against Tottenham to slaughter a rooster, resulting in a UEFA ban on European fixtures in Split.

The match was abandoned and a replay was scheduled for 21 May in the same stadium. Red Star won that match 1–3 with goals by Savic (2) and Petrovic, while Maricic scored for the hosts. Red Star went on to win the league that year by a 7-point margin over Sarajevo, while Hajduk finished 5th, a point away from UEFA Cup qualification.