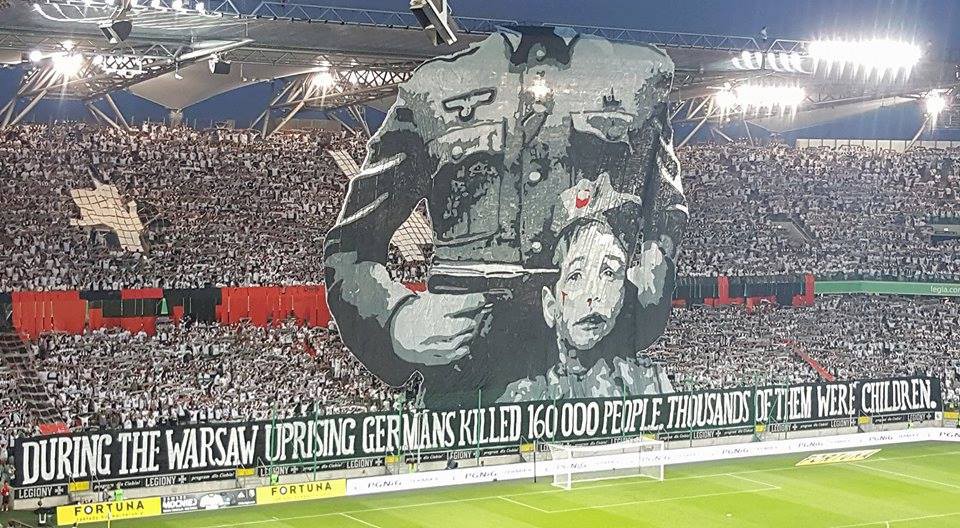 Every month Nations and Balls will provide you with a review of matches that led to fines and stadium bans by UEFA’s disciplinary committee. Our first edition coincides with the qualification rounds for Europe’s club football competitions and predictably has a lot to offer.

Legia’s fixture against Astana was one of those early qualification games that would have received little attention if it weren’t for a massive banner which was meant to commemorate the Warsaw Uprising, an operation by Polish resistance which attempted to liberate the city from Nazi occupation. The Nazis deliberately destroyed the city in retaliation and up to 200,000 civilians died during the hostilities.

The banner was initially shared enthusiastically by left-wing football pages on social media which celebrated what they thought is an antifascist message. However, there were two things that were strange about the banner. The first, and most obvious, was that the banner wrote that ‘Germans’ killed 160,000 people — a marked departure from usual antifascist displays that refer to the Nazis as, well, Nazis. The second was that this was Legia Warsaw that we were talking about.

Legia were punished last year for racist behaviour, including anti-semitic chanting, during a 6–0 Champions League group stage defeat at the hand of Dortmund. Earlier, in 2013, the stand that houses Legia’s hardcore support was shut after UEFA slapped the club with another charge of racist behaviour by fans during a Champions League qualifier against Steaua Bucharest. Nigdy Wiecej (‘Never Again’), Poland’s leading anti-racist NGO according to their website, claimed that “the president of Legia Warsaw, Leszek Miklas, an impressive and honest man, readily admitted that 15–20% of his club’s fans were neo-Nazis.”

Legia were fined 50,000 euros and part of their stadium was ordered closed for displaying an illicit banner. Legia’s fans decided to respond with another banner blasting UEFA for its decision — earning the club another 50,000 euros in fines and another partial closure of their stands.

This clash was expected to generate controversy. Levski were already due to serve a stadium ban against Hajduk in the return leg due to racist behaviour in last summer’s match against Maribor in the second round of Europa League qualification. Levski had also been fined ca. 18,000 euros by the Bulgarian Football Federation for their fan’s banners displaying swastikas and Adolf Hitler’s birthday, while earlier they had also been fined for racist behaviour by fans against Sarajevo in another Europa League tie in 2012.

One would be forgiven to think that Levski would avoid controversy given their fans wouldn’t be in their stands, but their hooligans managed to still make international headlines after they decided to stage a show outside Hajduk’s hotel. A video made its appearance online, titled ‘Good morning Hajduk, did you have a good sleep?’ showing fireworks go off outside the hotel at 4 am, surely waking up Hajduk’s players that were trying to get some sleep. Reports suggest that Levski hooligans were roaming Sofia’s streets trying to find any Hajduk supporters mad enough to have made the trip.

The first leg featured a lot of violence. 20 Levski fans were arrested during clashes that left a car burned. Nova TV reported that a group of travelling Bulgarian supporters were attacked by 30 masked men while having lunch, while another group were “forced to remove their plate number” in an obvious bid to make their car less recognizable. UEFA also found that Hajduk’s support had put on racist behaviour during the match, fining the club 30,000 euros and ordering the partial closure of their home ground.

Even though traditionally Serbian and Greek hooligans get along, they get along so well that they even take sides in each other’s leagues. Partizan’s fan firm is affiliated to that of PAOK Thessaloniki, while Olympiacos’ fans often display Red Star Belgrade banners in their stadium. The fixture was therefore considered dangerous enough to not allow away fans in the stands. The match also followed a clash against Buducnost in which Partizan fans called their Montenegrin counterparts ‘barbarians’ and ‘Albanians’ for refusing to join their “Kosovo is Serbia” chants.

Despite a Partizan announcement before the Olympiacos match begging fans “no fireworks and political banners, no chants with political and racist content,” UEFA recorded racist chants and banners during the Belgrade leg of the clash between Serbia’s and Greece’s champions. These contributed, alongside charges related to objects being thrown on pitch and more, to a 130,000 euro fine and two matches behind closed doors. A third match will also take place in an empty stadium if (or rather, when) Partizan’s fans find themseles foul of UEFA regulations again within the next three years.

Olympiacos had also been punished earlier this year by UEFA for racist behaviour by fans during a Europa League fixture against Turkey’s Osmanlispor which saw 3,000 seats remain empty during the club’s next European fixture against (also Turkey’s) Besiktas. In 2013 2,000 seats were left empty during a tie against Manchester United after a racist banner made its appearance in a match against Anderlecht.

Partizan beat Buducnost 2–0 in Belgrade and drew 0–0 away to set up the Olympiacos fixture which they lost 3–5 on aggregate (1–3 in Belgrade.) They will now play in an UEFA Europa League group that also includes Albania’s Skenderbeu Korce.