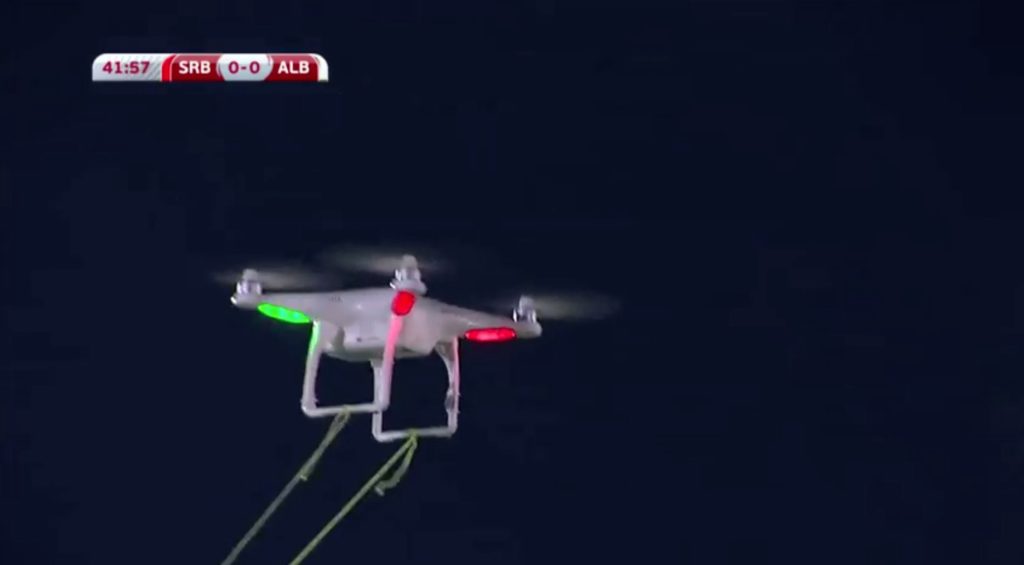 The Nations and Balls alternative preview of a UEFA Europa League fixture that’s what match officials’ headaches are made of.

UEFA has long had a policy of trying to minimise politically motivated controversies in its competitions by restricting clubs and national teams from various countries in conflict from drawing one another. Kosovo’s membership was initially conditional on it not playing against other former Yugoslav republics, while for the most recent UEFA club competition draws it ruled that Russian and Ukrainian sides couldn’t find themselves in the same group.

That didn’t prevent an eye-watering clash being set up between Skenderbeu Korce of Albania and Partizan Belgrade of Serbia, a few years after the countries’ national sides were involved in a match that went down in history for a drone carrying a flag showing ‘greater Albania,’ including Kosovo, parts of other neighbouring countries and — controversially for the home crowd in Belgrade — a bit of Serbia.

Partizan, once set up as the Sports Society of the Central House of the Yugoslav Army, is alongside Red Star Belgrade one of two dominant forces in Serbian football. Their main fan group, Grobari (Serbian for Undertakers), were involved with violent clashes against police and Zrijnski Mostar fans in Bosnia and Herzegovina which earned Partizan a disqualification despite an 11–1 win on aggregate.

The Grobari led chants of ‘Kosovo is Serbia’ in their first European fixture this season against Montenegrin champions Buducnost Podgorica. That the home crowd did not respond in kind was seen as a betrayal — the Grobarithen chanted ‘Barbarians, Albanians!’ at the visiting fans, using a derogatory term for Albanians that is quite frequently heard around the former Yugoslavia.

Skenderbeu, on the other hand, are Albania’s most successful side in recent years. Named after Albanian hero George Castriot Skanderbeg, they won six titles in the past seven years, although one was stripped of them following an UEFA investigation into match-fixing. Matches against rivals KF Tirana are often marred by violence, with a 2016 fixture making international headlines as a woman was carried away from the stadium injured during fan clashes. A tie against Lokomotiv Moscow was dominated by anti-Albanian chants which are quite common among Russian nationalist hooligans.

One of Skenderbeu’s players will return to Partizan’s stadium for the first time after 14 october 2014, when Albania was visiting Serbia for the UEFA Euro 2016 qualifiers. The match, taking place in front of 25,200 home fans — away fans are rarely allowed into intra-Balkans fixtures — had started with slogans of ‘kill, kill the Albanians’ and flares flying from the stands onto the pitch. English referee Martin Atkinson, who later officiated the 2015 Europa League final between Dinamo Dnipropetrovsk and Sevilla, had interrupted the match a few times already.

During another pause in play, a drone made its appearance over the stadium carrying a flag showing a map of ‘Greater Albania’ — one of many irredentist nationalist ideas in the region. According to the map, Kosovo — according to many in the home crowd, still part of Serbia — was included in Albania, alongside other parts of Greece, Macedonia, Montenegro and Serbia. Serbian defender Stefan Mitrovic managed to wrestle the flag and the drone to the ground, provoking the ire of Albanian defenders Taulant Xhaka and Andi Lila who ran to take the flag away from Mitrovic. In the scuffles that follow, a fan who invaded the pitch took a stool to Bekim Balaj, another Albanian player who by then had managed to take the flag away, to then be punched to the ground by Albania’s captain Lorik Cana.

By that point, the situation had escalated to a fight between everyone in and around the pitch and Atkinson took the players back to the dressing room. It is worth noting that Serbian internationals Aleksandar Kolarov and Danko Lazovic did their best to diffuse the situation and protect the visiting team’s players. Albania won that match 3–0 on paper, while the following war of words between the two countries included their leaders, Aleksandar Vucic (who accused the Albanians of causing the incident and wearing provocative nationalist clothing) and Edi Rama (who urged Serbia to recognise Kosovo.)

Goalkeeper Orges Shehi, Skenderbeu’s current captain, was listed as a substitute for that match.

Skenderbeu are back in European football after serving a one-year ban for match-fixing. Their third place in the Albanian Superliga earned them a first round tie against Andorra’s Sant Julia who they comfortably beat 6–0 on aggregate. They went on to beat Kairat (3–1 agg.), Mlada Boleslav (3–3 agg., 4–2 on penalties) and Dinamo Zagreb on away goals (1–1 agg.) to earn a spot in the group stage. Skenderbeu were previously Albania’s first representative in the groups of a European competition, finishing 4th against Lokomotiv Moscow, Sporting Lisbon — who they beat 3–0 at home in their only win — and Besiktas.

Partizan Belgrade won the Serbian SuperLiga in 2016/17 and qualified for the second qualifying round of the UEFA Champions League where they beat Buducnost Podgorica 2–0 on aggregate. In the third round they lost out to Greek champions Olympiacos 3–5, which set up a Europa League play-off tie against Videoton from Hungary. A 4–0 victory saw them through to the group draw.

The two sides will also face Dynamo Kiev and Young Boys in Group B of this year’s UEFA Europa League.