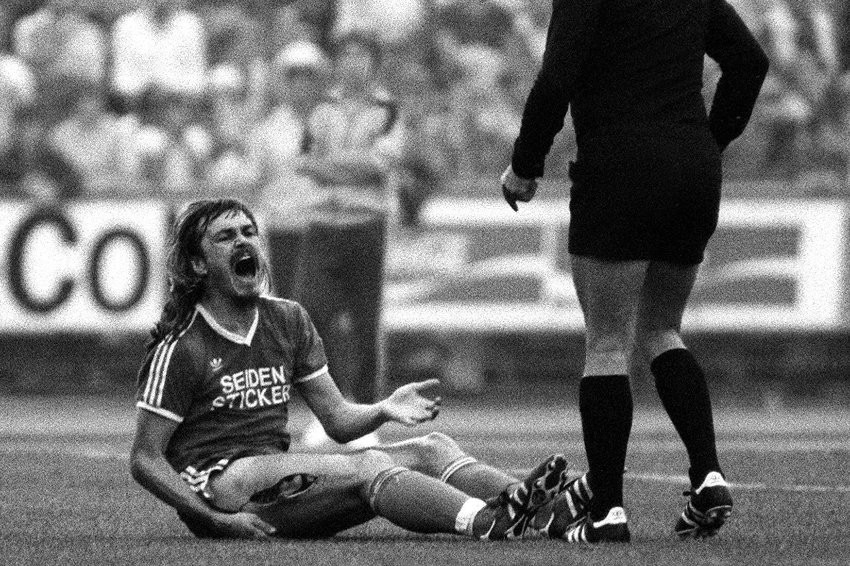 A West German footballer who was labelled a ‘Communist’ during the Cold War found himself leading a march against a G20 meeting.

Gabriel Kuhn writes in Soccer vs the State: “Ewald Lienen wore long black hair, was nicknamed “Lenin,” refused to sign autographs, propagated vegetarianism, supported the peace movement, and co-initiated the first German players’ union.” In short, he was everything he wasn’t supposed to, which could explain why he was never called up to the West German national team. In the 1980s Lienen was involved with the German Communist Party and in 1987 he quit the Bundesliga to set up the union Kuhn wrote about in Duisburg.

“I was never a Communist… Socialism which throws basic civil liberties overboard never corresponded to my ideology” said Lienen in a 2015 Welt interview. “On the one hand, I was the Gladbach captain, on the other hand I held speeches as a peace activist… such deviants from the mainstream opinion were immediately given the ‘Communist’ stamp. I remember a CDU season ticket holder sent his ticket back saying I couldn’t possibly be captain. CSU politicians wanted to forbid me from exercising my basic democratic rights, I should ‘keep my nose down and play football.’ Incredible conditions, which also corresponded to those on the pitch. There was a war on the pitch.”

Lienen, who started his career at Arminia Bielefeld, was part of the Borussia Monchengladbach setup that won the UEFA Cup in 1979, scoring goals against Manchester City in the quarterfinal and Duisburg in the semifinals. He was on the pitch throughout the two final legs where Gladbach drew 1–1 away and won 1–0 at home against Red Star Belgrade.

Lienen didn’t manage to win the league title with Gladbach though. On the final matchday of the 1977/78 season his team was trailing Koln on goal difference. Koln were playing already-relegated St. Pauli, so the Gladbach side knew they needed to score at least 10 goals against Dortmund to stand a chance. Lienen scored the 11th goal at the 87th minute in a 12–0 victory which still remains Bundesliga’s biggest win. Koln, on the other hand, managed to put 5 past St. Pauli and won the title by a goal difference of 45 to Gladbach’s 42. Lienen left Gladbach soon after to return to Bielefeld.

During an August 1981 match against Werder Bremen, Lienen’s thigh was slit open by a tackle so vicious that it is still referred to in articles about football’s worst offenders. The injured Lienen did not go after Norbert Siegmann, the player who’s studs opened a 25 cm wound, but ran — in shock and with the wound still wide open — to the opposing manager convinced that he had ordered the hit. That manager, Otto Rehagel, had openly conservative sympathies and would later win the European Championship for Greece in 2004. Lienen was reportedly convinced that it was his politics that were to blame for what was widely described as Bundesliga’s worse tackle. Coincidentally, Rehagel was Dortmund’s manager in that 12–0 defeat.

It only made sense that Lienen, after managing thirteen sides in Germany, Spain, Greece, and Romania, would end up at FC St. Pauli, by then Europe’s most famous left-wing club. (Lienen had also managed Koln for three years.) Lienen took over in the middle of the 2014/15 season taking the club to 15th place, a position and a point above the relegation play-offs, and then went on to finish 4th in 2015/16, a position and twelve points below the promotion play-offs. Last season, St. Pauli spent most of the year in or near the relegation zone but Lienen managed to eventually lead the club to a respectable 7th place. At the end of the season, Lienen left his post to become St. Pauli’s technical director.

Commenting on his St. Pauli tenure, Lienen told Die Zeit “I am one of those people who believe that many things happen in life for a reason. I’m not saying that my whole life was geared to land at St. Pauli. But you could get the idea. I can identify with the club, because I support the philosophy of the club to one hundred percent.”

That is how Lienen found himself in Hamburg on 5 July 2017, where he held a banner reading “Outraged against G20 — Engage yourselves!” at the head of a march. During the meeting of the world’s most powerful leaders, the city played host to violent clashes between protesters and the police which left a number of cars burned and windows smashed. FC St. Pauli found itself at the forefront of the protest movement, hosting the alternative media centre at its stadium and offering shelter to hundreds of protesters.

The player with the long black hair and the iconic moustache, at 63, is right at home at St. Pauli.

P.S.: Having worked in Greece, Lienen couldn’t have stayed silent on the situation there. “The crisis of Greek football has the exact same causes with the financial crisis. This country was betrayed by the rich and the polticians that allowed the crisis or took advantage of it. Already, nine years ago, 90% of football clubs’ tax bills were forgiven. The state lost 100 million just in the case of AEK Athens” he said in an interview with FAZ. He added that Greeks “were outraged with Europe and Merkel because they feel like they are being strangled.”