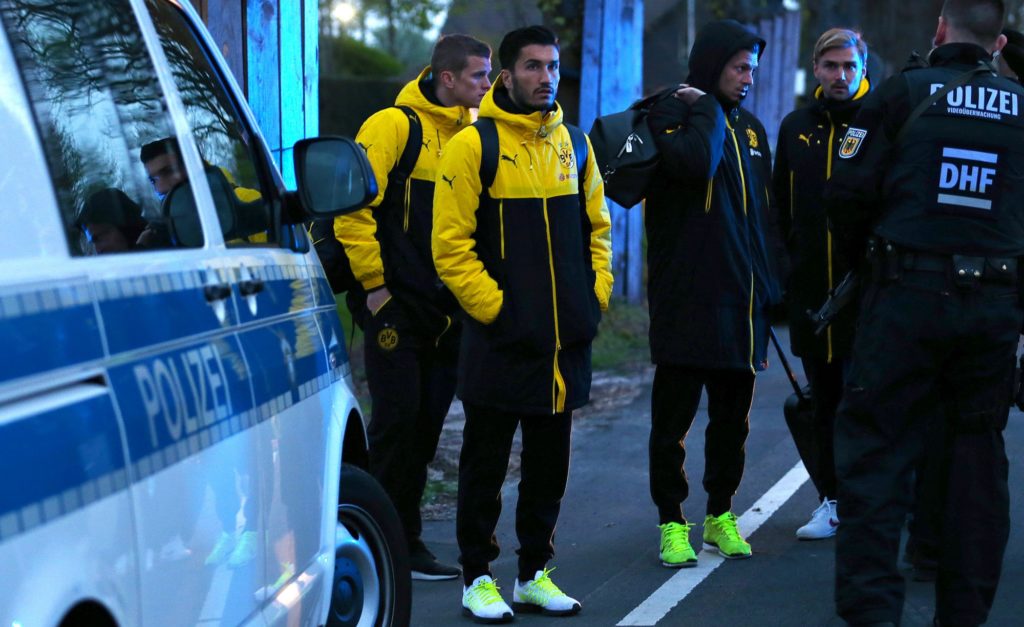 A narrow escape, a triumph and two tragedies

The night when football held its breath in shock, but also remembered why it is the beautiful game.

Last year in the quarter-finals of the Champions League, the most mouth-watering fixtures were two clashes between four European giants. On one side were Spanish power-houses Barcelona and Real Madrid, against Juventus and Bayern Munchen, respectively. One can hardly find a better match, something that is most often the case in semi-finals or finals.

On the night of April 11th, all eyes were set on Turin for the first match between Juventus and Barcelona. A replay of the 2015 final in Berlin, the night was set for the clash between the ‘impenetrable shield and the all-piercing spear’. Sadly, that was not the main event of the night.

The second game that evening was to be played in Dortmund, where hosts Borussia Dortmund were welcoming AS Monaco. Both teams can arguably be considered second-tier teams at this stage of the competition, yet they managed to get the public eye, for all the wrong reasons.

While on their way to the Westfalenstadion, Borussia Dortmund’s bus was hit by an explosion. In the incident, Spanish defender Marc Bartra was injured by the shattered glass from the bus windows. Apart from him, none of the other players was injured. A local police officer escorting the bus on a motorcycle suffered a blast injury and shock. The rest of the players were visibly unharmed, but one can imagine how shaken they were after this explosion. In his version of the incident in The Players Tribune, Borussia midfielder Nuri Sahin explains the few minutes during and after the attack.

Then everything started happening in slow-motion. I had no idea what was going on. I just sort of … froze … I guess. But my mind was racing. In the span of maybe two seconds, I thought of my entire life. I thought of dying — but I thought of living, too. And then I thought of my family. I saw my five-year-old son, my one-year-old daughter and my wife. I could feel them there with me.

And then I snapped out of it … and I realized where I was. I turned around and saw my teammate Marc Bartra. His arm was bleeding … bad … and I looked up and saw his eyes. I’ll never forget his eyes. They were dark and terrified. I saw other guys behind him start to stand up, but I screamed as loud as I could, “Stay down! Stay down! Get away from the windows!”

We had no idea what was happening or if it was over yet. I yelled at the bus driver, “Don’t stop! Please, please, please do not stop! Just keep moving! We have to move!”

I thought that maybe people were going to try to get on the bus and, you know … kill all of us.

The bus moved a couple more meters up the road before we could settle ourselves and see that nobody was outside. My ears were ringing, but I was O.K. I was alive. I turned on my phone and called my wife and my mom. I told them that I was all right — but that I didn’t know what had happened exactly. I hung up, looked around and everyone was just … still. Nobody was moving or talking. I didn’t really look at the bus when I got off … I just wanted to be away from it.

Marc Bartra was immediately taken to hospital and went to surgery that evening, removing pieces of glass shard from his right wrist. The injury was not severe and he made his comeback on May 20th, playing 90 minutes in the 34th matchweek, helping his team in a 4–3 win over Werder Bremen.

Now there are two important events that happened immediately after this incident. The first one showed the spirit of the fans and their compassion for each other, something that transcended football and rivalries and warmed the heart of every football fan around the world. The second one was a cold reminder that football is still a business and that rarely can something shake the predetermined order of events.

Given that it was impossible for Borussia Dortmund’s players to play an hour after suffering a bomb attack and seeing one of their teammates getting sent to the hospital, the match was cancelled that evening and postponed until the next day (we will come to this again later). For the Dortmund fans that meant going home, cursing at this stupid world and going to bed. For the AS Monaco fans, it was a different situation. All of them traveled to Dortmund for the match without any sleeping arrangements, looking forward to watching the match and then hitting the road back home. Now they were stuck in Dortmund and had to wait until the next day to watch their team and meanwhile find a place to sleep for the night. Given that there were a lot of speculations about the causes of the attack, I can imagine how all those people felt, not knowing how and why is your match postponed, hearing the words ‘explosion’, ‘bomb’, ‘attack’, ‘injuries’. Even the bravest would agree it’s uncomfortable, at least. Probably the thing you need the most is a friendly face and a drink, just to defuse the tension and to remind you that beside the madness, this world is full of people that are nice and kind and care about other people. And so it happened.

#bedforawayfans became the hashtag where the local Dortmund fans offered accommodation for the night for the travelling Monaco fans. Starting to gather visibility on Twitter, hundreds of people offered their homes to rival fans, understanding that those people just wanted to see their team play. They traveled 1200 kilometers wanting to be a part of a sporting spectacle, get their fair share of German beer and go home. None of them had anything to do with what happened that night. This gesture from the local fans was applauded widely across the football world and was named one of the top 5 impacting sports hashtags by Deutsche Welle. Hundreds of pictures were shared and retweeted that night, Dortmund’s yellow and black next to Monaco’s red and white, people sharing food and drinks.

The second thing that happened in the aftermath of this attack was the decision made by the UEFA officials, in agreement with club officials from both clubs that the match should be re-scheduled the next day. Borussia Dortmund went on to lose that match 2–3 against a professional AS Monaco side (with 2 goals scored by the potential second most expensive player in the history, Kylian Mbappe. At the time of writing this article, Mbappe was still a Monaco player and had undergone a medical at PSG, soon to be announced). After the match, Borussia’s coach Thomas Tuchel claimed that UEFA officials decided about the time of the replay on their own and only informed the teams. However, according to UEFA’s own accounts, the decision was made in agreement with both clubs and no one from Borussia’s hierarchy complained at that point in time. The UEFA rulebook for postponed matches is that the clubs, in cooperation with the local policies and security authorities should agree on a time for the replay at ‘the earliest possible opportunity’ . It was clearly a decision made in a haste, with a lot of emotions, and with a lot of pressure from media, sponsors, scheduling etc. It should’ve been given a more professional approach and a cold head which would set aside all the pressure from the business side and think about the players and the state in which they would play the match.

In the end, the suspect for the bomb attack was found and charged with 28 attempts of murder yesterday. Although there were notes left at the bomb site pointing to Islamist radical terrorism, the German police quickly dismissed that scenario. It turns out that the suspect bought options in Borussia Dortmund the previous day and intended to lower the value of the shares with the attack, given that he had an agreement to sell with a predetermined price. It was all about money.