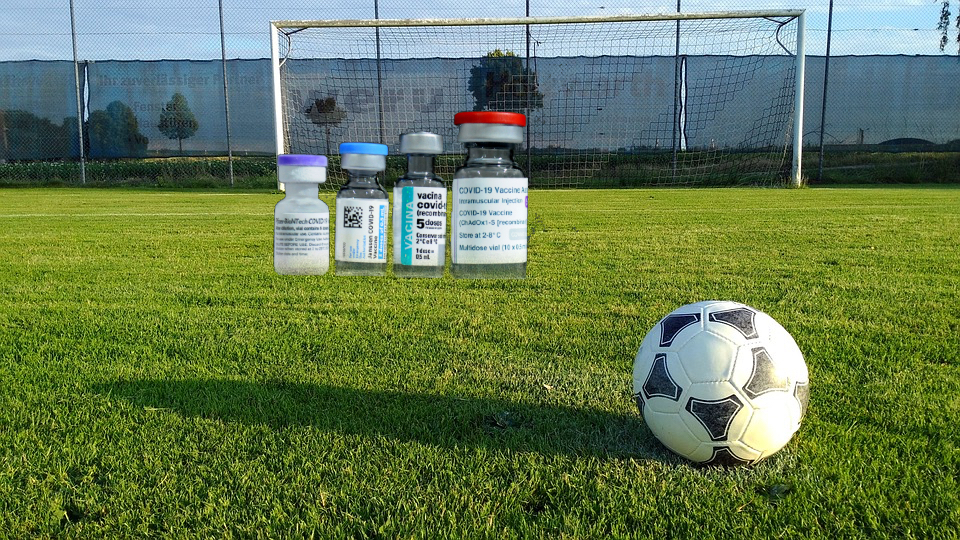 Players, clubs and leagues are caught between a ‘right to choose’ and the pandemic.

Europe’s governments are taking turns in announcing new measures to tackle yet another ‘wave’ of a pandemic that seems certain to drag on for months – if not years. As before, these policies also impact football, alongside every other aspect of our lives.

The Netherlands already ordered matches to be played behind closed doors in November. Germany’s eastern state of Saxony followed suit days later, meaning no home fans were at hand at the Red Bull Arena to celebrate Leipzig’s win against Manchester City. As the Omicron variant spreads fast across the continent, TV directors are probably searching for more of those sound effects that attempted to bring some life to empty stands during the lockdown.

These measures follow a long series of attempts to convince Europe’s unvaccinated to get one of the millions of jabs sitting around across the continent. Some countries are toughening their approach, banning those without a vaccination certificate from the office, the pub or even the train. Austria is set to become the first EU member state to make the vaccine mandatory.

Liverpool’s Mohammed Salah is a leading voice backing the vaccination drive, arguing that everyone should listen to the experts. “They are doctors who have been working and studying medicine for years. If I said this is wrong, then I’ll be like anyone in the street [who] said pass this ball here instead of this.”

Of course, football doesn’t only involve spectators, but also players, coaches and staff. Ten Premier League fixtures have been postponed due to COVID-19 outbreaks within clubs. While footballers are generally young and healthy, they also have the same worries that the rest of us do. Chelsea’s Kante is reportedly among those concerned about hanging out with unvaccinated colleagues at the workplace. Salah’s manager Jürgen Klopp said he would not sign unvaccinated players, calling them a ‘constant threat.’

The Premier League announced that 81% of its players had received at least one COVID-19 vaccine dose by mid-October, which at the time was slightly lower than the percentage of people across England that had received their first jab. Numbers are likely to vary significantly by club though – for instance, Klopp claimed 99% of his players were vaccinated.

So far, footballers are not among those forced to get vaccinated before they turn up for work. German political leaders were keen to see professional players subject to the same restrictions applying to spectators. That would mean that some high-profile vaccine skeptics, a list which included several Bayern Munich players, would be prohibited from plying their trade until they change their mind and get their shot.

Joshua Kimmich was one of those that caused headaches among the German champions’ leadership over his reluctance to get vaccinated. After missing out on matches due to quarantine rules, he eventually tested positive for COVID-19 and will be sidelined until next year as doctors found liquid in his lung.

West Brom’s Callum Robinson, who had already contracted the disease twice, said that his “choice at the moment” was to remain unvaccinated. Kimmich’s response to becoming sick with COVID-19 was different, now regretting not getting vaccinated earlier. In an attempt to explain his stance, he said “it was difficult for [him] to cope with [his] fears and concerns.”

Vaccine hesitancy has cost clubs and national teams in terms of missed games and unwelcome publicity. Bayern decided to stop paying those on its roster who have to quarantine because of their unvaccinated status. But some are trying to avoid the jab without anyone noticing: Werder Bremen’s manager Markus Anfang stepped down last month after prosecutors launched a probe into his allegedly fake COVID-19 vaccination certificate.

Football the only sport debating what to do with athletes that refuse the jab. Tennis’ top-ranked male player Novak Djokovic will miss the upcoming Australian Open unless he is vaccinated – so far he’s remained opaque over whether he’s taken the jab. His up-and-coming colleague Stefanos Tsitsipas was convinced to get vaccinated in order to not miss out on the Melbourne event.

Djokovic has responded to criticism insisting that athletes, alongside everyone else, should have the “freedom to choose” whether to receive their shot. Klopp takes a different view, comparing not getting vaccinated to driving drunk, as it poses a risk to others’ health.

It is likely that players who still refuse the jab will be left out in the cold. International travel regulations have already affected the plans of managers desperate to have their players available for matches. Even where regulators have not made vaccines mandatory for all players, Bayern Munich and other clubs are asking questions of players who are unable to deliver on their obligations because of their failure to get the vaccine.

Whatever these players decide to do, we still risk watching the beautiful game on TV, with sponsor-laden banners silently cheering our teams on instead of fans, unless we get our act together and beat this pandemic. A key part of that is, of course, getting vaccinated.