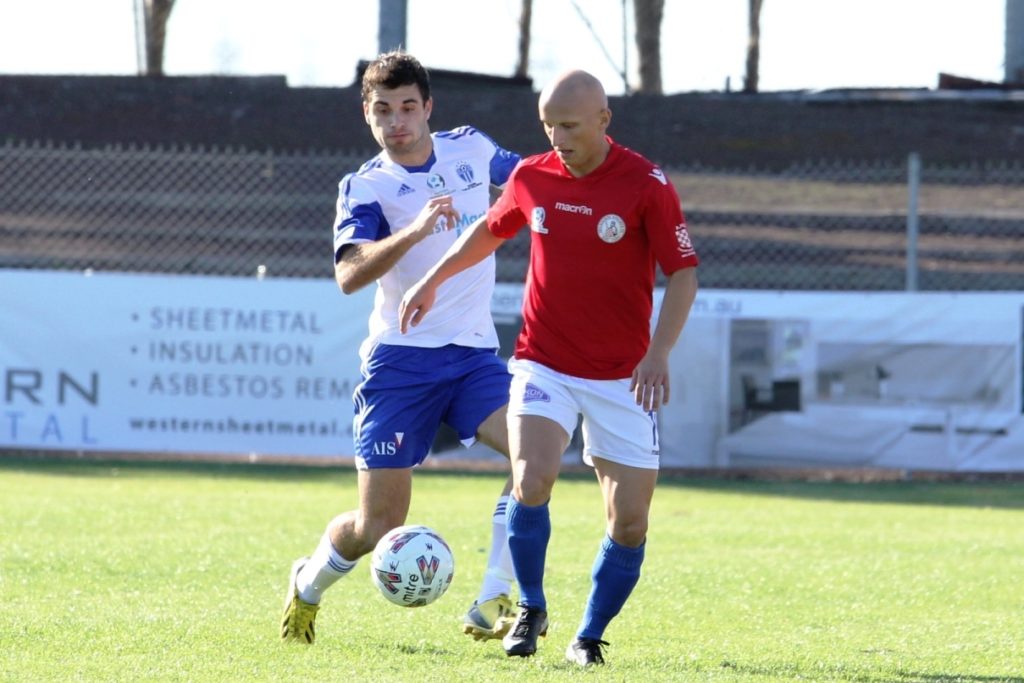 The search for a balance between identity and inclusivity for Australia’s football continues.

Despite Australia’s history within the British Empire, in the end it was migrants from southern Europe that made football (or soccer, as it is known down under) a popular sport on the island. Greeks, Italians, Croats and others brought their love for the beautiful game on their long journey to Australia. While in their new home, football also became a way to save identities from the places they left behind.

Hellenic, Sydney Croatia, Adelaide Juventus — just three of the hundreds of football clubs that were founded with names, colours and symbols that made no secret of which migrant community the team belonged to.

These clubs didn’t only carry the communities’ pride for where they came from, but also the rivalries that migrants brought with them to their new homes.

For those Croats who supported their country’s independence from Yugoslavia, their most intense rivalries were predictably against Serbs and football clubs aligned to the Yugoslav regime. One of these Belgrade-backed clubs was the Yugoslav United Soccer Team (JUST).

A Melbourne Croatia Fans hooligan said that they hated JUST more than other Serbian clubs, because the Serbs “at least they were honest in regards who they were.” The two clubs met 11 times in the National Soccer League, “against a backdrop of fistfights, rock-throwing, general abuse, firebombs, arson attacks and some very good football.”

The last match between Melbourne Croatia and JUST was in 1989. The Croats won 2-0, sealing JUST’s relegation from the National Soccer League. While Yugoslavia was plunging into the constitutional crisis which led to its collapse, JUST also disappeared in 1990.

Melbourne Croatia/Knights and JUST were by no means the only two clubs whose matches were marred by severe violence. In Melbourne, another bitter rivalry existed between South Melbourne Hellas and Preston Makedonia (today Lions), along the lines of the Macedonia name issue. Further afield, the 1985 ‘Pratten Park riot’ interrupted the game between Sydney Olympic (Pan Hellenic) and Sydney City (Hakoah).

Football authorities in Australia were wary of the sport’s image and tried to rid the game of the migrants’ national symbols. One of their key strategies to make football look more ‘Australian’ was to force teams to change their names to something devoid of references to other countries, substituting those with English-sounding monikers.

In those circumstances, South Melbourne Hellas transformed into South Melbourne Football Club, the team that played at the 2000 FIFA Club World Cup. The cross from Greece’s flag was dropped from the logo but the colours two of the stripes remained, a reminder of which community is behind the club.

Their neighbours SC Croatia renamed themselves to the less ethnic-sounding Melbourne Knights. Their new name though turned out to be an abbreviation for Klub Nogometa i Gdje Hrvati Takmice Srcem (Football Club and Where Croats Battle from the Heart). The logo’s knight continues to hold a red-and-white checkerboard.

The Knights’ fanbase remained controversial long after JUST and Yugoslavia were no more. The club maintains links to several “Croatian Clubs” which continue to display the imagery of the Ustasha, Croatia’s World War II fascist Nazi-allied regime. The club also had to distance itself its social arm’s decision to hold a rock concert for neo-Nazi skinheads in 2007.

When Football Federation Australia established its new professional league, the A-League, there was no space for the clubs that formed the sport’s backbone for decades. South Melbourne, which IFFHS called ‘Oceania’s Club of the Century,’ has tried to earn a spot in the league three times, all unsuccessful.

Instead, new franchise clubs were created around the country and in New Zealand. An exception is Brisbane Roar, which began life as Hollandia F.C. until forced to change names in 1973. All in all, 11 of 14 clubs which appeared in the A-League were founded after the league was created in 2004.

Even though the migrants’ clubs continue playing at state-level leagues, for many they have been reduced to a distant, bad memory of what football used to be like in the A-League era.

These two worlds collided when Australia’s federation launched the FFA Cup in 2014 which, for the first time, pitted A-League teams against those from further down Australia’s football pyramid.

When Melbourne’s Knights made it to the last 16 in 2016, a journalist with Australia’s public broadcaster called the flares in the post-match celebration “more nostalgic than threatening.”

In 2019 though, when the Knights faced the A-League’s Adelaide United, the nostalgia was overshadowed by the trauma of ethnic violence. United’s Nikola Mileusnic, who has Serbian roots, was booed by the Knights’ Croatian fanbase (according a match report which the club disputes.)

The Knights’ legendary leader Ange Cimera complained about the “artificial ceiling” his club faces, unable to aspire to a spot in the top league. But as he said himself when fans were setting flares off in 2016, some people never learn.

Meanwhile, football administrators are still struggling to figure out how to balance the passion of migrant communities for their clubs with the need for football to be a truly inclusive activity. After all, in every other aspect of Australian society, multiculturalism is praised — in football, it was hidden behind the A-League’s trademarks.

Maybe, one day, the Knights will neither have to hide their true name in an abbreviation, nor have to apologise for their fans.